After studying at the MUDRA dance school and the Tisch School of the Arts in New York, in 1980 Anne Teresa De Keersmaeker created Asch, her first choreographic work. 1982 saw the premiere of Fase, four movements to the music of Steve Reich, one of the most influential pieces of choreography of the era. In 1983 De Keersmaeker set up her Rosas company at the same time as creating the work Rosas danst Rosas. The focus of her work is the relationship between dance and music. She has used the music of composers from several periods. While Rosas was resident at La Monnaie (1992-2007), De Keersmaeker directed a number of operas. The relationship between dance and words is another thread running through her work. Her recent productions have been characterised by cooperation with artists. In 1995 she established the P.A.R.T.S. dance school in association with La Monnaie. 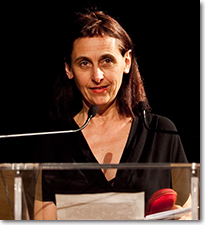