Dai Ailian is a famous ballerina who was born in 1916 into an overseas Chinese family living in Trinidad. Her years as a dance teacher and educator helped China build a generation of dancers, choreographers, and educators. She is known by China as the "Mother of Chinese dance".
Dai Ailian studied ballet and modern dance abroad, yet her artistic life as a dancer has its roots and has blossomed in the soil of Chinese national dance. In the following years, Dai choreographed, performed, and taught dance in China. She was named principal of the Beijing Dancing School when it was first set up in 1954. After the founding of New China in 1949, Dai Ailian's artistic path became even wider. In the early 1950s, she was involved in the creation and leading performance of the first ballet in China: Dove of Peace. Two dances with a strong national flavor, Dance of Lotus Flowers and Flying Apsaras, swept the stages both home and abroad as they won the gold prize at the World Youth Festival. By the 1990s, authoritative dance organizations designated these two dances as 20th century classics of Chinese dance. From 1950, Dai Ailian began to work at various leading posts, such as the director of the Central Song and Dance Ensemble, the first dean of the Beijing Academy of Dance, the director and adviser of the Central Ballet Troupe, and vice-chairman of the Chinese Dancers' Association.
In 1982, she was elected the vice-chairman of the International Council for Dance of the UNESCO, and attended the meeting of the council in Paris every year till her death. Her trademark works include Lotus, Flying Apsaras, Longing for Home, The Mute Carries the Cripple, Tibetan Spring, Anhui Folk Dance, and Sale. All of them are fruits of careful studies of Chinese dances. Although classical and some folk dances were restricted in China during the Cultural Revolution (1966–1976), Dai remained influential in Chinese and international dance circles after China opened up to the world and began its economic reform process in the 1980s. She introduced a number of noted dancers such as Rudolf Nureyev and Margot Fonteyn to teach in China and tried her best to promote Chinese dancers to the world. 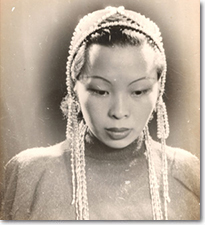