Kazuo Ohno was born in Hakodate City, Hokkaido, in 1906. After graduating from the Japan Athletic College, he began working as a physical education teacher at Kanto Gakuin High School, in Yokohama. In 1929, after seeing a performance by the Spanish dancer Antonia Merce, known as La Argentina, he was so impressed that he decided to dedicate his life to dance. He began training with two of Japan's modern dance pioneers, Baku Ishii and Takaya Eguchi, the latter a choreographer who had studied Neue Tanz with Mary Wigman in Germany.
In the 1950s, Kazuo Ohno met Tatsumi Hijikata, who inspired him to begin cultivating Butoh (originally called Ankoku Butoh, the "Dance of Utter Darkness"). Butoh was evolving in the turmoil of Japan's postwar landscape. Hijikata, who rejected the Western dance forms so popular at the time, developed with a collective group the vocabulary of movements and ideas that later, in 1961, he named the Ankoku Butoh-ha movement. In 1959, Hijikata created one of the earliest Butoh works, Kinjiki(Forbidden Colors), based on the novel by Yukio Mishima.
In 1977, Ohno premiered his solo Butoh work directed by Hijikata, La Argentina Sho (Admiring La Argentina), which was awarded the Dance Critic's Circle Award. In 1980, Kazuo Ohno was invited to the 14th International Festival in Nancy, France, and toured to Strasbourg, London, Stuttgart, Paris and Stockholm. With Hijikata directing, he created two more major works, My Mother and Dead Sea, performed with Yoshito Ohno. Other works of Ohno's include "Water Lilies", Ka Cho Fu Getsu (Flowers-Birds-Wind-Moon)and The Road in Heaven, The Road in Earth. As one of the most significant Butoh performers, Ohno has toured throughout Europe, North and South America, Australia and Asia.
He was awarded a cultural award from Kanagawa Prefecture in 1993, a cultural award from Yokohama city in 1998 and the Michelangelo Antonioni Award for the Arts in 1999.
Kazuo Ohno starred in the films, The Potrait of Mr.O (1969), Mandala of Mr.O (1971) and Mr.0's Book of the Dead (1973), directed by Chiaki Nagano; in The Scene of the Soul (1991) by Katsumi Hirano; and Kazuo Ohno (1995), directed by Daniel Schmid.
He has written three books on Butoh, The Palace Soars through the Sky, a collection of essays and photographs, Dessin with drawings and notes on his Butoh creations and Words of Workshop, a collection of lectures given in his workshop. Also "Bread for Soul", a book of his selected pictures from 1930's through 1999, has been published. 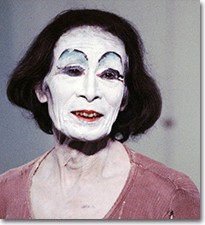