Norodom Sihamoni born 14 May 1953 is the current reigning King of Cambodia. He is the eldest son of Norodom Sihanouk and Norodom Monineath Sihanouk. Previously Cambodia's ambassador to UNESCO, he was named by a nine-member throne council to become the next king after his father Norodom Sihanouk abdicated in 2004. Before ascending the throne, Sihamoni was best known for his work as a cultural ambassador in Europe and as a classical dance instructor.
As a child, Sihamoni was sent to Prague, Czechoslovakia, by his father in 1962, where he, while attending elementary school, high school and Academy of Music Arts, studied classical dance and music until 1975. During the 1970 coup d'état by Lon Nol, Sihamoni remained in Czechoslovakia. In 1975, he left Prague and began to study filmmaking in North Korea, and in 1977 returned to his native Cambodia. Immediately, the ruling Khmer Rouge government turned against the monarchy, and Sihamoni was put under house arrest by the Khmer Rouge with the rest of the royal family until the 1979 Vietnamese invasion. In 1981, he moved to France to teach ballet and was later president of the Khmer Dance Association.
In 1993, the prince was appointed Cambodia's delegate to UNESCO, the UN cultural body based in Paris, where he became known for his hard work and his devotion to Cambodian culture. 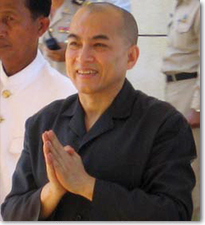