Born November 20, 1925, Maya Mikhailovna Plisetskaya is a Russian ballet dancer, frequently cited as one of the greatest ballerinas of the 20th century. She studied under the great ballerina of imperial school, Elizaveta Gerdt. She first performed at the Bolshoi Theatre when she had just turned 11 years old. In 1943, she graduated from the choreographic school and joined the Bolshoi Ballet, where she would perform until 1990.

From the beginning, Maya was a different kind of ballerina. She spent very short time in the corps de ballet after graduation and was quickly named a soloist. Her bright red hair and striking looks made her a glamorous figure on and off the stage. Her long arms had a fluidity that to this day remains unmatched. Maya was also known for the height of her jumps, her extremely flexible back, the technical strength of her dancing, and her charisma. She excelled both in adagio and allegro, which is very unusual in dancers.
Jewish and living in an anti-Semitic climate, her family had been purged during the Stalinist era and as her personality was defiant, she was not allowed to tour outside the country for six years after joining the Bolshoi. In 1959, Nikita Khrushchev finally permitted her to travel abroad, and Plisetskaya could tour internationally. Her ability changed the world of ballet, setting a higher standard for ballerinas both in terms of technical brilliance and dramatic presence.
Maya's most acclaimed roles included Odette-Odile in Swan Lake (1947) and Aurora in Sleeping Beauty (1961). In 1958, she was honoured with the title of the People's Artist of the USSR.
After Galina Ulanova left the stage in 1960, Maya Plisetskaya was proclaimed the prima ballerina assoluta of the Bolshoi Theatre. In the Soviet screen version of Anna Karenina, she played Princess Tverskaya. In 1971, her husband the composer Rodion Shchedrin wrote a ballet on the same subject, where she would play the leading role. Anna Karenina was also her first attempt at choreography. Other choreographers who created ballets for her include Yury Grigorovich, Roland Petit, Alberto Alonso, and Maurice Béjart with "Isadora".
In the 1980s, Plisetskaya and Shchedrin spent much time abroad, where she worked as the artistic director of the Rome Opera Ballet in 1984–1985, then the Spanish National Ballet of Madrid from 1987–1989. At the age of 65, she finally retired from the Bolshoi as a soloist. On her 70th birthday, she debuted in Béjart's piece choreographed for her and entitled "Ave Maya". In 1996 she was named President of the Imperial Russian Ballet.
In 2006, the Emperor Akihito presented to her the Praemium Imperiale, informally considered a Nobel Prize for Art. 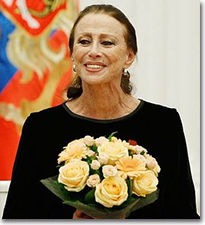