Merce Cunningham (1919-2009) was a leader of the American avant-garde throughout his seventy year career and is considered one of the most important choreographers of our time. Through much of his life, he was also one of the greatest American dancers. With an artistic career distinguished by constant innovation, Cunningham expanded the frontiers not only of dance, but also of contemporary visual and performing arts. His collaborations with artistic innovators from every creative discipline have yielded an unparalleled body of American dance, music, and visual art.

Of all his collaborations, Cunningham’s work with John Cage, his life partner from the 1940s until Cage’s death in 1992, had the greatest influence on his practice. Together, Cunningham and Cage proposed a number of radical innovations. The most famous and controversial of these concerned the relationship between dance and music, which they concluded may occur in the same time and space, but should be created independently of one another.
Born in Centralia, Washington on April 16, 1919, Cunningham began his professional modern dance career at 20 with a six-year tenure as a soloist in the Martha Graham Dance Company. In 1944 he presented his first solo show and in 1953 formed the Merce Cunningham Dance Company as a forum to explore his groundbreaking ideas. Over the course of his career, Cunningham choreographed more than 150 dances and over 800 “Events.” Cunningham’s lifelong passion for exploration and innovation made him a leader in applying new technologies to the arts. He began investigating dance on film in the 1970s, and choreographed using the computer program DanceForms during the latter part of his career. He explored motion capture technology to create décor for BIPED (1999).
Cunningham earned some of the highest honors bestowed in the arts. Among his many awards are the National Medal of Arts (1990) and the MacArthur Fellowship (1985). He also received the the British Laurence Olivier Award in 1985, and was named Officier of the Legion d’Honneur in France in 2004. 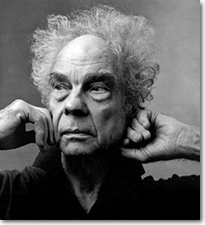