Miyako Yoshida was born in Japan in 1965 and began her training in Tokyo. In 1983, at the age of seventeen, she won the coveted Prix de Lausanne competition which gave her a scholarship to The Royal Ballet School. She joined Sadler’s Wells Royal Ballet (now Birmingham Royal Ballet) in July 1984 and was promoted to Soloist in 1987 and Principal in 1988. She moved to The Royal Ballet in September 1995.

In 1989 she was awarded the Global Prize for her achievements as a Japanese dancer working in Europe. First given in 1988, the Global Prize is awarded annually to the Japanese artist, performer or writer considered to have made the biggest impact in Europe. In 2001 she was awarded the Arts Encouragement Prize for Artists of the Ministry of Education, Science Sports and Culture in Japan, and in 2004 was appointed UNESCO Artist for Peace.

In September 2006 Miyako Yoshida became a Principle Guest Artist with The Royal Ballet. 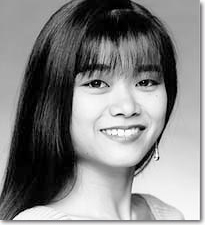