Born in 1963 in Karlsruhe, Germany. She studied dance and choreography in Amsterdam and New York. In 1993 she co-founded her company, Sasha Waltz & Guests, with Jochen Sandig. In 1996 she opened the critically acclaimed Sophiensaele, a theater she co-founded with Sandig. In September 1999, Waltz was named one of the artistic directors of Berlin’s Schaubühne am Lehniner Platz where – amongst others ­– she created the pieces "Körper" (37th "Theatertreffen" Berlin), "S" and "noBody", the choreographic installation "insideout" and "Impromptus".

In 2005 Sasha Waltz & Guests once again became an independent company, with Jochen Sandig as artistic director. In January 2005 her first opera-choreography "Dido & Aeneas" had isst world premiere at Staatsoper Unter den Linden, Berlin. As chairperson of the board of trustees of the Radial Stiftung, Sasha Waltz has been involved in the setting up of a new production and training centre for Music, Dance and the Visual Arts for Berlin called Radialsystem V, opened in september 2006. 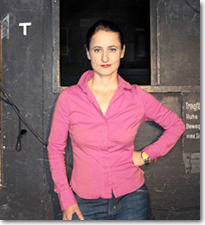