Sidi Larbi Cherkaoui’s first experience as a choreographer was with the ‘contemporary musical’ Anonymous Society, director Andrew Wale’s salute to the music of Jacques Brel. Cherkaoui also danced in this production for which he won several awards including the Fringe First Award and the Total Theatre Award in Edinburgh, and the Barclay Theatre award in London.
Rien de Rien, Cherkaoui’s first choreography as a member of Les Ballets C. de la B. artistic team, toured Europe in 2000 and won the Special Prize at the BITEF Festival in Belgrade. He worked on this production with singer and dancer Damien Jalet, who introduced him to Italian folk songs and went on to have a great influence on his later creations. Rien de Rien went on a marathon tour and also won him the Promising Choreograph prize at the Nijinski Awards in Monte Carlo in 2002.
2003 saw Cherkaoui storm Europe with the much-acclaimed Foi, which revolved around the nature and power of belief – and went on to win the Movimentos Dance Prize in Germany. The following year, he will create again as a member of Les Ballets C. de la B. a production entitled Tempus Fugit.
In parallel, Sidi Larbi Cherkaoui collaborated to diverse projects: Ook (2000) with the choreographer Nienke Reehorst at the Theater Stap in Turnhout; d’avant (2002) with Damien Jalet and Sasha Waltz & Guests company; zero degrees (2005) with Akram Khan. Sidi Larbi Cherkaoui also worked for several theatres, operas and dance companies from the Ballets de Monte-Carlo (In memoriam, 2004 et Mea culpa, 2006), to Sadler’s Wells in London (Sutra, 2008), via the Grand Théâtre de Genève (Loin, 2005), the Ballets Cullberg de Stockholm (End, 2006), the Royal Danish Ballet (L’Homme de bois, 2007) and the Monnaie (Apocrifu, 2007; Myth et Sutra, 2008). At La Monnaie in Brussels, he created the choreography of the opera House of the Sleeping Beauties by Kris Defoort. Since 2006, he has been in residency in Toneelhuis where he created productions such as Myth (2007) and Origin (2008). Since 2008, he has also been an associated artist of the Sadler’s Wells in London.
In 2008 and 2011, the magazine Ballet Tanz proclaimed him ‘choreographer of the year’. In 2009, the Alfred Toepfer foundation gave him the Kairos Prize for its artistic vision and its research of a cultural dialogue. He also received the title of « Best choreographer » at the National Dance Awards, and Sutra was named one of “Best productions of the year” by the Ballet Tanz.
This same year brought his first commissioned work for an American company: Orbo Novo (meaning The New World) choreographed for the New York-based Cedar Lake Contemporary Ballet premiered at the historic Jacob’s Pillow dance festival in July 2009. The piece, made for sixteen dancers, was another collaboration with composer Szymon Brzóska.
2010 marks a watershed year in the trajectory of Sidi Larbi Cherkaoui: the launch of Eastman, his company, which is in residence at Toneelhuis and is project partner of Art Campus De Singel, Antwerp, and the revival of seminal Foi. In April, De Munt hosted the world premiere of Babel, choreographed together with Damien Jalet, the third part of a triptych that began with Foi and continued with Myth. Babel triumphed at the Laurence Olivier Awards 2011, the performance won two Olivier Awards: Best New Dance Production and Outstanding Achievement in Dance for the set design by Antony Gormley. Sidi Larbi Cherkaoui has also been awarded a Giraldillo Award for Dunas, and proclaimed “young artist for intercultural dialogue between the Arab World and the West” by Unesco in 2011.
In 2011, Cherkaoui choreographed Labyrinth for the Dutch National Ballet, an intimate piece for a group of 19 dancers, for which Szymon Brzóska composed the music. He also created TeZukA, a piece for 15 dancers and musicians based on the work of the Japanese manga artist Osamu Tezuka. 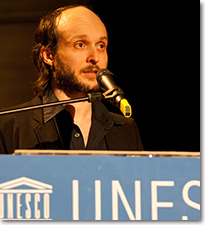