William Forsythe is recognized as one of the world’s foremost choreographers. His work is acknowledged for reorienting the practice of ballet from its identification with classical repertoire to a dynamic 21st-century art form. Forsythes’ deep interest in the fundamental principles of organisation has led him to produce a wide range of projects including Installations, Films, and Web based knowledge creation.

Raised in New York and initially trained in Florida with Nolan Dingman and Christa Long, Forsythe danced with the Joffrey Ballet and later the Stuttgart Ballet, where he was appointed Resident Choreographer in 1976. Over the next seven years, he created new works for the Stuttgart ensemble and ballet companies in Munich, The Hague, London, Basel, Berlin, Frankfurt am Main, Paris, New York, and San Francisco. In 1984, he began a 20-year tenure as director of the Ballet Frankfurt, where he created works such as Artifact (1984), Impressing the Czar (1988), The Loss of Small Detail (1991, in collaboration with composer Thom Willems and designer Issey Miyake), A L I E / N A(C)TION (1992), Endless House (1999), and Decreation (2003). After the closure of the Ballet Frankfurt in 2004, Forsythe established a new, more independent ensemble, The Forsythe Company, based in Dresden and Frankfurt am Main. Works produced by the new ensemble include Three Atmospheric Studies (2005), You made me a monster (2005), Human Writes (2005), Heterotopia (2006), The Defenders (2007), Yes we can’t (2008/2010), The Returns (2009) and Sider (2011).
Awards received by Forsythe and his ensembles include the New York Dance and Performance “Bessie” Award (1988, 1998, 2004, 2007) and London’s Laurence Olivier Award (1992, 1999, 2009). Forsythe has been conveyed the title of Commandeur des Arts et Lettres (1999) by the government of France and has received the German Distinguished Service Cross (1997), the Wexner Prize (2002) and the Golden Lion (2010).
In collaboration with media specialists and educators, Forsythe has developed new approaches to dance documentation, research, and education. His 1994 computer application Improvisation Technologies: A Tool for the Analytical Dance Eye, developed with the Zentrum für Kunst und Medientechnologie, is used as a teaching tool by professional companies, dance conservatories, universities, postgraduate architecture programs, and secondary schools worldwide. As an educator, Forsythe is regularly invited to lecture and give workshops at universities and cultural institutions. 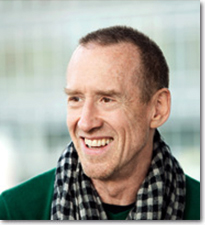