Salā Lemi Ponifasio is a Samoan choreographer, stage director, designer and artist. In 1995 he founded MAU in Auckland, New Zealand as transformative action working with communities and artists from all over the world. MAU is a Samoan word that means a declaration to the truth of a matter.

Ponifasio’s most recent works include Lagimoana (2015) for the Venice Biennale 56th Visual Arts Exhibition; Apocalypsis (2015), opera by R. Murray Schafer at the Luminato Festival, Toronto; I AM: Mapuche (2015) and MAU Mapuche (2016) with the indigenous people of Chile; and I AM (2014) for the 100th Anniversary of WW1, which premiered at the Avignon Festival followed by seasons at the Edinburgh International Festival, the Ruhrtriennale, Germany and the Auckland Arts Festival, New Zealand. His other creations include The Crimson House (2014) probing the nature of power and a world that sees all and no longer forgets; Stones In Her Mouth (2013), a work with Maori women as transmitters of a life force through oratory and ancient chants; the opera Prometheus (2012) by Carl Orff for the Ruhrtriennale; Le Savali: Berlin (2011) confronting the imperial City of Berlin with its own communities of immigrant families in search of belonging and constrained by threat of deportation; Birds With Skymirrors (2010) responding to the disappearing Pacific Islands, homelands to most of his performers and devastated by climate change; and Tempest: Without A Body (2008) concerning power and terror and the unlawful use of state power post 9/11. 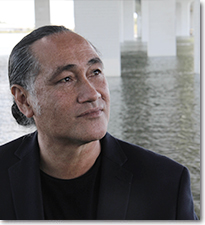 If you can't download a PDF or need the message as a Word file, please write to info(at)iti-worldwide.org to get the PDF or Word version.