Honouring Lin Hwai-min with a Lifetime Achievement Award, the jury of the International Movimentos Dance Prize, Germany, considers him “a foremost innovator of dance” and that “Lin Hwai-min ranks amongst artists of the century such as William Forsythe, George Balanchine, Birgit Cullberg….”
In July, 2013, Lin will follow in the footsteps of Martha Graham, Merce Cunningham and Pina Bausch to receive the prestigious Samuel H. Scripps/American Dance Festival Award for Lifetime Achievement. The Festival announcement states that: "Mr. Lin's fearless zeal for the art form has established him as one of the most dynamic and innovative choreographers today... his choreographic brilliance continues to push boundaries and redefine the art form." He will be the first recipient of this award who is not based in the United States or Europe.
In his homeland, Taiwan, Lin Hwai-min was first known as a critically acclaimed writer. In 1969, at the age of 22 and with two books of fiction published, he went to study in the States and obtained a Master of Fine Arts degree from the Writer's Workshop at the University of Iowa. He also studied modern dance at the University and in New York.
Lin Hwai-min founded Cloud Gate Dance Theatre of Taiwan in 1973, the Dance Department at the Taipei National University of the Arts in 1983, and Cloud Gate 2 in 1999. He is the Artistic Director for both dance companies which have received enthusiastic acclaims internationally. Choreographed 86 works, including 18 full-length productions, Lin often draws his inspiration from traditional Asian culture and aesthetics to create original works with contemporary resonance, which have made Dance Europe acclaim: “No company in the world dances like Cloud Gate. It presents a distinct and mature Chinese choreographic language. The importance of this evolution in Asian dance is no less profound than the impact of Forsythe’s Ballett Frankfurt on European classical ballet.”
Among the honours Lin Hwai-min has received are honorary doctorates from six universities in Taiwan and Hong Kong, the Taiwan National Award for Arts, the Ramon Magsaysay Award, the John D. Rockefeller 3rd Award, the award for 'Best Choreographer' at the Lyon Biennial Dance Festival and the Chevalier of the Order of Arts and Letters' from the French Ministry of Culture. In 2005, he was honored by Time Magazine as one of the “Asia’s Heroes.”
Lin Hwai-min has been the subject of full-length television documentaries, including Portraits Taiwan: Lin Hwai-min (Discovery Channel), Floating on the Ground (Opus Arte), and Lin Hwai-Min - Interface Between Worlds (ARTE/ZDF). Since 2000, he has served as the Artistic Director of “Novel Dance Series” for the Novel Hall for Performing Arts, Taipei introducing contemporary dance to audience in Taiwan. Choreographers featured in the series include Eiko and Koma, Meredith Monk, Susanne Linke, Akram Kahn, Ea Sola, Sidi Larbi Cherkaoui and Jerome Bel. Currently Lin Hwai-min serves as the mentor of dance for Rolex Mentor and Protégé Arts Initiative, guiding a young choreographer selected from around the world by a panel of dance experts.

The virtuosity of Cloud Gate dancers has made critics ask: “when has one ever seen a company with such magical and beautiful bodies?” and confess that they “possess a control and articulation that verge on the superhuman. These are performers who can make stillness every bit as eloquent as animation. In fact, they have the power to change your metabolism.”
Cloud Gate is the name of the oldest known dance in China. In 1973, choreographer Lin Hwai-min adopted this classical name for the first contemporary dance company in any Chinese speaking community.
Its 24 dancers receive trainings on meditation, Qi Gong, an ancient form of breathing exercise, internal martial arts, modern dance, ballet, and calligraphy. Through Lin Hwai-min’s choreographies the company transforms ancient aesthetics into thrilling modern celebration of motion. Acclaimed by The Times as "Asia's leading contemporary dance theatre," Cloud Gate has toured extensively with frequent engagements at the Next Wave Festival in New York, the Sadler's Wells Theatre and Barbican Centre in London, the Moscow Chekhov International Theatre Festival, and the Internationales Tanzfest NRW directed by Pina Bausch.
At home, Cloud Gate also enjoys high acclaim and popularity. In addition to the regular seasons in theaters, the company stages annual free outdoor performances in various cities in Taiwan, drawing audiences of up to 60,000 per performance.
In 2003, in recognition of Cloud Gate’s contribution to the cultural life of Taipei, the Taipei City Government named Fu-Hsing North Road Lane 231, the home of Cloud Gate’s office, as “Cloud Gate Lane.” In 2010, a new asteroid, discovered by National Central University, Taiwan, was named after Cloud Gate.
Most of Cloud Gate's productions have been made into videos. Among them, Songs of the Wanderers, Moon Water, Bamboo Dream, and Cursive II (now known as Pine Smoke) were filmed in Europe. 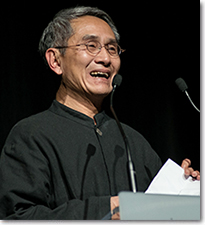