Maguy Marin studied classical ballet at the Toulouse conservatory. She then joins the Strasbourg ballet company to eventually change path, enrolling at the Mudra School at its creation in 1970 in Brussels. Three years of intensive work are determining in the course of her career (« all my bearings are crumbling to let appear the multitude of creative choices, freedom, constraint too... Nothing will ever be the same ».) She then takes part in a theatrical research group, Chandra, which is rather short-lived (until the end of 1974). She is soloist for four seasons for the Ballet du XXe siècle company under Maurice Béjart's directing, and conducts her first experiments in choregraphy. In 1978, she is still in Brusells and works with Daniel Ambash ; from this point onward her creating activities expand rapidly, especially after the prize she is awarded at Concours chorégraphique international de Bagnolet in 1978. Her style leans towards a French pendant of Tanztheater, developed in Germany by Pina Bausch, incorporating numerous theatrical and dance-free elements in her choreographies. From then on she becomes one of the most important choreographers of the French New Dance, notably with the now-mythical work, May B., created in 1981 at the Contemporary Dance Center of Angers alongside with her contemporary version of Cinderella created in 1985 the ballet de l'Opéra de Lyon and performed more than 460 time since, with ten different castings. She begins in 1987 a long-lasting collaboration with the musician and composer Denis Mariotte. At the head of the Centre chorégraphique national of Créteil and of Val-de-Marne from 1985 and then at the Centre chorégraphique national of Rillieux-la-Pape from 1998 to 2011, she moves to the city of Toulouse in 2012. The company is born, evolves and changes, developing these last few years its work in the non-dance. To this day, it has realized more than forty works.

Maguy Marin is one of the very few non-American women to have been presented the American Dance Festival Award. In 2008, she is granted a Bessie Award in New York for her show Unwelt presented at the Joyce Theater. The 2012 edition of the Paris' Festival d'automne honors her with a retrospective, programming six of her emblematic creations in eight theatres of Paris and its area. 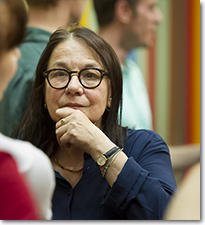