Born in Lyon in 1973, Mourad Merzouki began practicing martial arts and circus arts at the age of seven. When he was fifteen, he encountered hip-hop culture for the first time and through it, he discovered dance.

He quickly decided to develop this form of street art while also experimenting with other choreographic styles, particularly with other dance artists Maryse Delente, Jean-François Duroure and Josef Nadj.

The wealth of his experiences fed his desire to direct artistic projects, blending hip hop with other disciplines. It is what he did in 1989 with Kader Attou, Eric Mezino and Chaouki Saïd when he created his first company ‘Accrorap’.

In 1994 the company performed Athina during Lyon’s Biennial Dance Festival; it was a triumph that brought street dance to the stage.

Merzouki’s travels have led him into unchartered territory, where dance can be a powerful means of communication. In order to develop his own artistic style and sensitivity, Merzouki established his own company, Käfig, in 1996.

In January 2006, the Company Käfig began residing in Espace Albert Camus in Bron. This linked theatre with the festival Karavel, created in 2007 by Mourad Merzouki, programming notably around 10 hip hop companies and other events in the city.

In parallel, he imagined and conceived a new place of choreographic creation and development, which led to Pôle Pik opening its doors in Bron in 2009.

In June 2009, Mourad Merzouki was appointed director of the Centre chorégraphique de Créteil et du Val de Marne. He continues to develop his projects there, with an accent on openness to the world. In 18 years, the choreographer has created 22 productions, and his company gives on average 150 performances per year around the world. 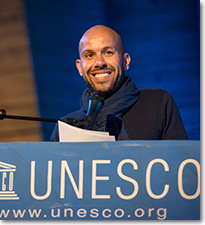