Israel Galván de los Reyes was awarded the National Dance Prize 2005, “Creation” section, by the Culture Department of the Spanish Government, for “his capacity to generate a new creation in an art such as flamenco without forgetting the real roots that have sustained it to the present day and that make of it a universal genre". In 2012 he was honored with the New York Bessie Performance Award for an Outstanding Production and the Fine Arts Medal awarded by the Council of Ministers of Spanish Government.

Son of sevillian bailaores Jose Galván and Eugenia de Los Reyes, he naturally grew up within the atmosphere of tablaos, fiestas and flamenco dance academies, where he used to accompany his father. But it was only in 1990 that he really felt like becoming a dancer.

In 1994, he joined the Compañía Andaluza de Danza, directed by Mario Maya, and this was the beginning of an unstoppable career that would bring him the most important awards in flamenco (and) dance.

He has done many collaborations in projects of very different nature and with very different artists such as Enrique Morente, Manuel Soler, Pat Metheny, Vicente Amigo and Lagartija Nick.

In 1998 Israel premiered ¡Mira! / Los Zapatos Rojos, his first creation. Praised by all the critics as a stroke of genius, it was effectively a revolution in the entire conception of flamenco shows. 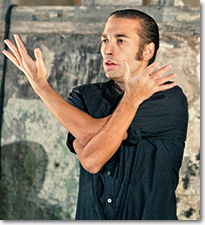