Brisbane-born Stephen Page is the first choreographer of Aboriginal and Torres Strait Islander descent to have achieved major national and international recognition.
Page studied dance at the college of the National Aboriginal and Islander Skills Development Association (NAISDA) and after graduating in 1983 began a professional career as a dancer with Sydney Dance Company. With Sydney Dance he appeared in After Venice, Wilderness, Nearly Beloved, Shining, Poppy, Company of Wo/men and King Roger and toured with the company to Greece, Italy, Japan, Hong Kong and Korea. Graeme Murphy created the role of the Faun in Late Afternoon of a Faun on Page and, while with Sydney Dance, Page choreographed Mooggrah (1991) for the company's season, The Shakespeare Dances.
Page joined Bangarra Dance Theatre as principal choreographer in 1991 and at the end of that year was appointed artistic director of Bangarra. As a choreographer Page seeks to meld traditional Aboriginal ideas and motifs with those of the urban culture in which he grew up. He is the recipient of two Australian Dance Awards - in 1997 he received the award for outstanding choreographic achievement and in 2010 the award for services to dance. He is currently still artistic director of Bangarra and directed the Adelaide Festival in 2004. In 2008 he was named NSW Australian of the Year. 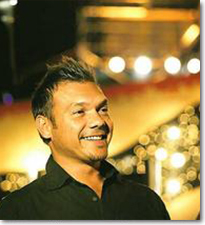